This is the first year of the USAV HP Region Prospect Holiday Camp.  HP Players were nominated by their Region HP Programs and the names were submitted to the USAV HP Staff.  Invitations were then sent to the final selectees for an opportunity to train at the Olympic Training Center in Colorado Springs, CO in December.

The following is a list of Aloha Region HP players that were selected: 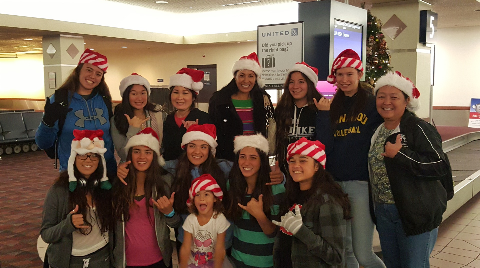 Today was the last day of this Holiday Camp.  Unfortunately, Jojo and Shelby were still resting from the flu bug so they were not able to play in the tournament.

Mahalo to all the coaches who inspired and taught our girls new things to take with them to the next level.  It was truly a great experience for all of our girls and judging from their preliminary feedback, they really enjoyed the adventure and made lots of new friends.

The girls attended 1 classroom and 2 gym sessions today.  They learned some interesting tips about scouting your opponents by looking for tendancies, weaknesses, and patterns.  Then it was time to get into teams and put everything together in preparation for tournament play.

Unfortunately, there was a bad 24 hour flu bug going around the camp that affected approximately 27 girls and 4 coaches.  This put a damper on team selection but luckily they were able to put together enough competitive teams to compete on the last day.

LET'S FOCUS ON OUR POSITIONS

It's another beautiful day in Colorado Springs...blue skies and temperature about 20s outside.  There must have been some snow overnight but much of it melting as the day goes on.

The coaches running this camp are motivators and positive.  They talk to the girls as if they were playing at the collegiate level.  They remind the girls, "look outside and know where you are...you are at the USA Olympic Training Center!  This place has trained many, many Olympians and you are following in their footsteps.  Not everyone gets to train here so when you are here, train hard and be proud to be an American Athlete."

I watch the interaction between the coaches and players and can't help to think that these girls will be one step higher when they go back home to their clubs.  I'm sure they are learning lots of new things and absorbing everything dished out to them...I can see it in their eyes.

The intensity in the gym is building, we can all feel it.  I watch on the sidelines and chat with some of the coaches...they like what they see.  I have no doubt that the girls here who will be playing in the Power League will be ready with the 2x day gym time at 7,000 feet altitude.

They are focused and intense in the gym but much more relaxed when we hit the dining hall.  There are definitely more athletes today than we saw in the past 2 days.  Swimmers, wrestlers, and weight lifters made their presence.  The dining hall is packed and the food...well, the food is AWESOME!  The dining hall staff are always concerned about the athletes so they are always asking for feedback.  Don't worry one bit about the girls and their meals.  It's always a buffet and they have so many variations from hot entrees to sandwiches to salads to "off the grill" to desserts.  The athletes are fed well and are always reminded by their coaches about nutrition, hydration, and rest.

Both groups were able to watch the volleyball documentary Court and Spark.  This is a short film about Courtney Thompson, USA National Team Setter, as she travels to Poland to play professionally and how she got there.  There were some shots of Tama when she was Courtney's teammate on their road to the 2012 London Olympics.

The day started out with Group 1 in the gym and Group 2 in classroom session watching the YNT/JNT Video...USA vs Dominican Republic.  Today's lesson was how to throw your opponent out of system and reading the players.

Than the players were divided in groups by positions.  Position 1 players (middles and setters) and Postion 2 players (outsides and liberos).  They watched another video in the evening that has to do with Perseverance with Group 2 in the gym again, ended the day.

The girls are more comfortable with the routine but some of them (especially in Group 2) were showing signs of tiring.  I give the girls credit for enduring such a rigorous schedule.  They are still very upbeat and tell me that they are enjoying the experience.  The coaches seem to like our girls.  They continue to be great ambassadors as I catch them telling other players about our Hawaiian culture.  For example...while waiting for Security to open the jammed washer door in the laundry room, Aria explained to a couple players why everyone calls me "Aunty".  She did a great job explaining while I listened to the interaction.

WE MADE IT TO THE OTC!

We finally made it to the OTC.  I arranged for our group to check-in early because I know how crazy it can get at the registration desk.  Luckily, we were so early that we had "first choice" of beds when we got to the dorms.  We are all on the same floor and thanks to Shayla, she started a group text so we're all connected.  I had a chance to talk to all our girls, including our hanai member Joanna from the Ohio Valley Region, about respect and privacy.  At check-in, I was told that this campus will be at full capacity with 5 different sport groups training at the same time.  I told the girls to respect the other athletes and if we see someone like Michael Phelps or some other Olympian we must respect their privacy.  Be back...

OK, so we're back from our OTC tour.  We first watched video highlights of the Sochi 2014 Games and a prelude to Rio 2016.  Then it was leaving the warmth of the Visitors Center to meet outside with our guide...in 20 degree weather!  With the wind chill our faces turned numb in the 3 minutes we were out there.  We walked to the first building to start the tour and defrost.

With the help of everyone, I will be able to post as many pictures as possible but it will have to be during my down time.  Stay tuned...

Group 1 girls (Jojo & Shayla) reported to the Athletic Center to meet up with the rest of the girls in their group.  They ate together and then went to the gym.  After their 2 hour training session and testing, they attended a classroom session where they learned about Nutrition and Hydration.

Group 2 girls (Aria, Izzy, Keonilaei, Braelyn, Lexis, Kamalei, Shelby) did the opposite.  They attended the classroom session first, then ended the night with their 2 hour training session and testing.

So proud ot our girls as they gave it their best on the first day.  Our girls clocked the 2 fastest times for the shuttle.  When they played 3 on 3, our girls worked hard and prolonged the rallies.

Everyone arrived safely at the COS airport.  The temperature is in the low 20s but looks like our girls came prepared with their warm jackets and gloves.  We are expecting some snow tonight, according to the weather report.  Four of the gils will be staying with Aunty Kelii at a different hotel while the other girls will be staying with me and 2 other parents.  A player from the Ohio Valley Region will be joining our group this afternoon and will be with us until we get to the OTC tomorrow.

We'll have a nice early Christmas dinner then back to our rooms to relax for the rest of the evening.

We are proud to be a Preferred Affiliate of Hawaiian Airlines.  Please email if you are interested in booking your reservation as an affiliate member.  Travelers must be USAV Aloha Region members.